Vaccination in Latin America and its Logistics 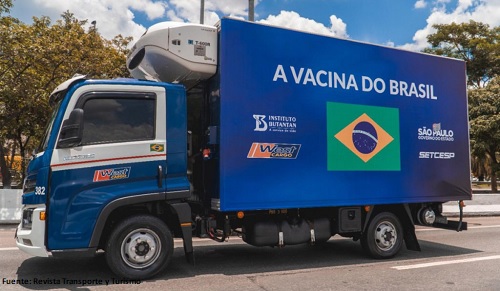 Vaccination in Latin America and its Logistics

article by: Corona Virus Noticias at: 2nd Feb 2021 under:

Since November 2020, governments have begun the process of finalizing vaccine procurement agreements to curb Covid-related infections19 in their countries, approve their emergency use and finally design the logistical plans to face the challenge of distributing millions of doses, maintaining the cold chain to achieve so in 2022 that society reaches herd immunity.

Companies that are part of the supply chain and the insurance sector are a fundamental part of meeting one of the greatest logistical challenges facing humanity. Their support will allow governments to transport millions of vaccines that require temperatures of up to -70°C so that they do not lose their properties, in ambitious plans that seek to vaccinate 70% of the population in approximately 1 year. The necessary equipment must then be available throughout the value chain, the temperature must be kept under control, the risks and insurance required for cargoes of high monetary value must be established, and the safety of transport must be ensured.

In the case of Latin America, infrastructure is another factor to be taken into account when transporting vaccines, because it has difficult-to-reach regions such as the Amazon rainforest, mountain ranges or simply areas that do not have roads in good condition or have access only by area or water.

With reference to 11 countries in the region: Brazil, Mexico, Argentina, Chile, Colombia, Peru, Ecuador, Panama, Bolivia, Uruguay and Costa Rica; approximately 720 million doses have been acquired (Table 1) of the various vaccines available and some agreements still need to be made.

Approximately 90% of the doses acquired so far require for transport to maintain a controlled temperature between 2°C up to 8°C. Although these requirements are standard in any type of vaccine and already have the experience and infrastructure; the main challenges are: 1) to keep the temperature under control as any variation can affect effectiveness, 2) to have the necessary logistical equipment to ensure the transport of the doses in the established times, 3) have adequate security and 4) establish protocols to provide security for cargo.

On the other hand, 10% of vaccines present a greater challenge for logistics as they require for proper maintenance, temperatures of -70°C for the case of Pfizer and -20°C for Moderna. This involves the acquisition of deep-freeze equipment for the storage, transport and distribution of the millions of doses purchased. In addition, insurance companies will have to establish the risks faced by the logistics chain with this type of cargo of great value but vulnerable to changes in temperature, bad handling or theft, and thus have the necessary insurance.

On Monday, January 18, Brazil began nationwide vaccination with Coronavac, the vaccine developed by the Chinese laboratory Sinovac in association with the Butantan Institute, attached to the Sao Paulo Governorate. On 22 January, it also received two million doses of the vaccine developed by the University of Oxford and the Anglo-Swedish laboratory AstraZeneca from India.

In Brazil, all CoronaVac vaccines will be stored at the Ministry of Health’s Distribution and Logistics Center (CDL), which is in Guarulhos, in the Metropolitan Region of São Paulo.

For transportation in the south, southeast, and Midwest regions, vaccines will be delivered only in refrigerated trucks and vans that will be checked before departure. In the northern and north-eastern regions, transport will be by air and, upon arrival at the respective destinations, air-conditioned vehicles will be responsible for ground travel. Some places will even receive boats with special cameras to support transportation.

After arriving at each location, the storage of vaccines and the logistics of the vehicle are the responsibility of the local municipality. The current fleet is 150 vehicles throughout Brazil, including trucks and vans, where all have a satellite tracking and blocking system. In addition, armed escorts by the Military Police throughout the country during the journey will be another way to maintain transport security.

The coronavirus vaccination program began on 24 December 2020. For its execution, the doses contracted to different global pharmaceutical companies such as Pfizer-BioNTech, AstraZeneca, Cansino Biologic, Sputnik and Covax will be used. As of January 31, 2021,674,327 doses have been applied by the US company in association with the German company.

The Mexican government considers greater applicability for vaccines that require deep freezing, in urban areas, while for vaccines that only require freezing and/or refrigeration for rural regions. As for schematics (one vs. two or more doses), it is necessary to consider the possibility of different times according to each vaccine between the first dose and the booster, if so required, In addition, there is greater difficulty in completing schemes that require more than one dose of vaccine in people living in regions of greater geographical vulnerability.

Vaccination was phased in, commencing phase 1 in December 2020. The first vaccine available in Mexico and in the world, was developed on a novel platform of messenger RNA with special storage requirements at -70ºC, with a shelf life of 5 days at temperatures between 2ºC to 8ºC and 6 hours once reconstituted.

UNAM made available to the federal and Mexico City governments 20 freezers to help the cold chain, essential to support the vaccination process against COVID-19. They have a combined capacity of about 10,500 liters, which would allow storage of three million to four million doses of the vaccine from the pharmaceutical company Pfizer.

Mexico has about 301 freezers throughout the country for vaccine conservation. These teams belong mostly to the state, but others were provided by various institutions of higher education.

The report of the Argentine Ministry has reported that to date 78,451 were vaccinated with the first dose and 65,583 with the second. On 1 February, he resumed his vaccination campaign with the distribution of 220,000 doses of the Russian Sputnik V vaccine in the country.

The doses will arrive via area and then Correo Argentino is taking care of the distribution by land in all the provinces except in Santa Cruz and Tierra del Fuego. In these two provinces the vaccines arrive through planes of Aerolíneas Argentinas, and once they are there, Correo Argentino distributes them inside them.

On December 24, the country received the first shipment of vaccines from Pfizer-Biontech and according to what was reported by Infobae upon arrival at the Air Force Group 10 (FACH) facilities, where all shipments will be received, was flown by helicopter to the National Stadium in Ñuñoa, about 30 kilometers from the landing site. A location that will continue to operate for subsequent arrivals and was set up as a permanent logistics hub. From there, the vaccine will be transported by land for the thawing process at the Metropolitan Hospital.

The country plans to vaccinate its at-risk population of 5 million by the end of March and up to 80 per cent of the target audience in the first half of the year, out of a total of nearly 19 million people.

As reported by the country, with 18,174 deaths confirmed by covid-19 and 714,143 contagions accumulated since March 2020, the first inoculations in the South American country were carried out last December 25, with the vaccine of the North American Pfizer. They were mainly intended for health officials working in the critical patient units (UPC) of different hospitals in the country. Since then, 56,764 people have been vaccinated with the first dose and 10,349 with the second.

The national government announced that the vaccination plan will begin on February 20 and in total, Colombia has acquired 61.5 million doses, with an investment of more than 2 trillion pesos, which will allow to vaccinate 35 million 250 thousand people during the year 2021.

As reported avant-garde, The Government delivered projections of the arrival and availability of vaccines per month in the country. According to Health Minister Fernando Ruiz, in February, Colombia would have 337,000 vaccines. This would be the month in which the lowest dose would arrive for the covid-19 immunization plan.

In order to guarantee the cold chain, it is proposed to acquire 44 freezers, of which 9 are already in the national territory. In addition, it will be established in a warehouse in the free zone of Bogota as a distribution center and that has the capacity to store 50 million vaccines since each freezer can house more than 1,300,000 doses.