2020 and the loss of containers at sea 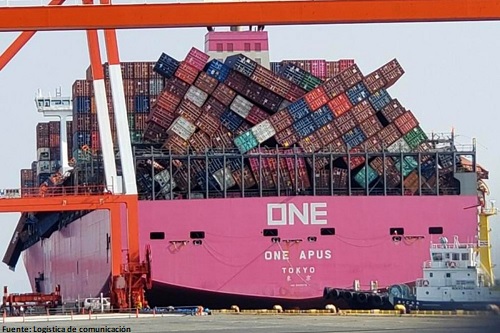 2020 and the loss of containers at sea

2020 was an atypical year for various factors such as the pandemic caused by the Covid-19, and for the maritime sector for several events where the loss of containers during the maritime adventure occurred. The most emblematic case was that of the One ‘Apus’, which in December lost 1,816 containers in the waters of the Pacific, and that is why ALSUM collected the 5 most relevant events during the last year.

On certain occasions, according to Naucher Global, the containers carried by the vessels do not reach their destination due to accidents, collisions, sinking or a bad trench or stowage. The World Shipping Council (WCL), which represents the world’s leading shipping companies, produces a report every three years on the cargo lost annually by container ships. The latest, which dates from 2017, figure in 568 containers on average lost during the period 2008-2016.

In 2020, this record has increased due to the following events:

According to initial figures released by the owners and the manager, some 1,816 containers were lost overboard as a result of severe weather conditions when the ship was approximately 1,600 nautical miles northwest of Hawaii. Among those lost are 64 containers of dangerous goods, including 54 with fireworks, eight with batteries and two with liquid ethanol.

Record load loss: This is believed to be the largest climate-related load loss in history. The incidents of Svendborg Maersk (lost 517 units in the Bay of Biscay in 2014) and MSC ZOE (lost 342 units in the North Sea in 2019) are previously two of the worst cargo losses recorded.

Consulting firm WK Webster conducted an initial drone inspection in Kobe and analyzing the situation they said: ‘With 1,816 containers lost overboard and what appear to be thousands more collapsed along the deck, the total cargo/container losses resulting from this casualty will of course be very substantial. We anticipate that cargo losses, based on average containerized cargo values, can reach US$200 million or more, ‘according to the General International Cargo Directory.

According to the report from mundo marítimo, on January 16, 2021, approximately 750 containers were lost overboard of the “Maersk Essen”, a 148,723 TPM vessel with a capacity of 13,100 TEUs. The shipping company reported that the culprit was bad weather in the North Pacific and that this was the third incident of container loss recently reported in the Pacific. On December 26th the ship had sailed from Xiamen in China and was due to arrive in Los Angeles on January 22nd.

The maritime claims consultancy WK WEBSTER reported that the “Maersk Essen” arrived on January 26th at the Lázaro Cárdenas anchorage as a port of refuge. For its part, Maersk reported that the ship will call at APM Terminals Lázaro Cárdenas on Saturday, January 30th. The plan is to inspect the ship and the damaged cargo on board, and then determine the cargo options.

As for damaged containers, they explained that the amount of unloading time is still unclear. “We will have clarity once the ship arrives at the port, a damage assessment is carried out and port operations are started,” they added. While, regarding potentially damaged containers, they reported that routing updates have been made in the systems to reflect the discharge of Lázaro Cárdenas.

In relation to undamaged containers, the shipping company reported that there are four possible scenarios:
– The cargo remains on board / the ship sails from Lázaro Cárdenas to Pier 400 in Los Angeles.
– The cargo of the “Maersk Essen” is embarked on another ship in Lázaro Cárdenas for its transit to Los Angeles.
– Cargo is transported by rail by Kansas City Southern (KCS) to Los Angeles and final destinations as originally booked.
– Customers consider leaving cargo in Mexico and using it in their supply chain in Mexico City.

This container ship of 5,780 TEU capacity, lost about 50 containers off the coast of New South Wales in Australia. In addition, about 74 containers are stacked on the ship’s edge. The APL ENGLAND covered the route between China and Australia, when on May 24 the container cargo was lost.

The Australian Maritime Safety Authority (AMSA) has explained that the ship arrived at anchor in the port of Brisbane (opposite Port Cartwright), where a team of inspectors established the structural and operational conditions of the ship following the collapse of the container piles on the deck. The containers contained appliances, building materials and medical supplies.

Australian news channels report that surgical masks have landed on Australian beaches, as reported by APL ENGLAND, according to Naucher Global.

As reported by Bloomberg, the shipping company MSC Mediterranean Shipping Co. said it lost a limited number of empty containers in the Pacific Ocean on one of its vessels during a trip from the United States to China.

The MSC Aries ship was traveling from Long Beach – California to Ningbo-China when the containers were overturned overboard during bad weather, the company said in a statement Thursday. Preliminary reports show that no cargo entered the water and a survey is underway to assess whether the remaining containers on board were damaged.

Forty-one (41) empty containers fell from the ship on January 29th-2021, according to a notice on the website of maritime claims consultancy W.K. Webster, who said he appointed a surveyor to investigate the extent of the damage.

Geneva-based MSC said the Aries docked at Ningbo port on Thursday, February 4th, and it is expected to resume service shortly after the inspection is completed.

‘The container ship MSC Palak sailed from the Port of Ngqura at 12:00 on 13 July 2020 due to strong winds and made anchor number 2 to withstand bad weather. On 13 and 14 July 2020, a heavy storm passed along the South African coast and caused an intense climate in Algoa Bay. The height of the swell measured in Algoa Bay was approximately 3.5 m. At 23:37 on 14 July 2020, a report was received from Port Control that MSC Palak had lost containers overboard while at anchor, ‘according to Port Portal.

‘An initial assessment was that six (6) containers had fallen overboard and that they had sunk, however, in the first light of 15, the ship confirmed that in fact, 23 containers had been lost overboard, ‘off the coast of South Africa.

According to G Captain, An inter-Hawaiian barge lost more than 20 containers overboard off the coast of Hilo on Monday morning, June 22, and several containers remain missing.

The U.S. Coast Guard. He said that he responded to a report of loss of cargo from the Ho Omaka Hou barge as the Hoku Loa tugboat transited with the barge to the port of Hilo.

The tugboat operator reported that at 4:30 a.m. on Monday, several 40-foot containers fell overboard. That number of missing containers stands at 21.

According to a June 26 report, the Australian Maritime Safety Authority (AMSA) responded to an incident involving the loss of approximately three containers from the Liberian-flagged container ship, Navios Unite.

The ship reported having lost the containers overboard in bad weather some 33 km southwest of Cape Leeuwin in Western Australia at 8 pm on 25 June 2020.

This type of event requires a constant study to inform the market about the legal, economic and insurance implications of the loss of containers during the maritime journey.