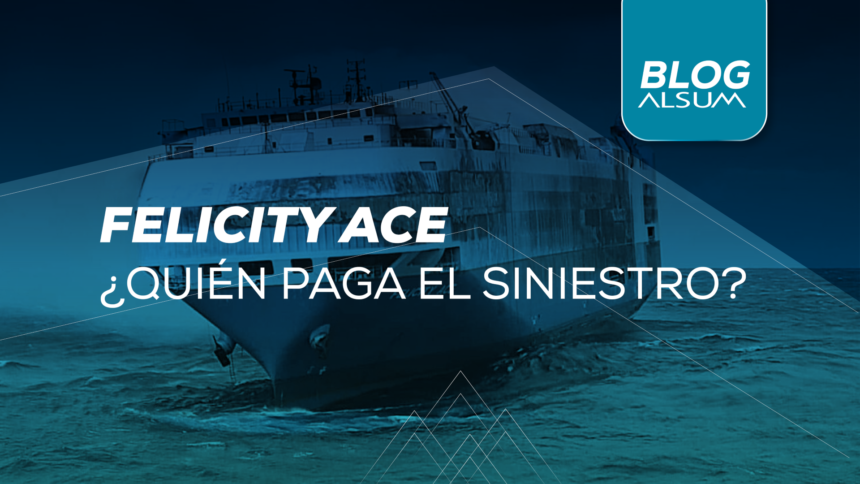 article by: Comunicaciones ALSUM at: 22nd Mar 2022 under:

The sinking of the Felicity Ace in the Atlantic Ocean on march 2nd will be an estimated loss of 500 million dollars, due to the total loss of the ship, vehicles and other shipped cargoes. The Felicity Ace was a Roll-on/Roll-off car Carrier, IMO 9293911, DWT 17738, built in 2005, operated by Mitsui OSK Lines (MOL) and flagged in Panama.

The vessel was sailing from Emden, Germany, to Davisville Port, Rhode Island, USA. On the 16th of February, the ship caught a fire while navigating near the coast of Azores Island, Portugal. All the crew members were evacuated safe and sound, and after drifting for 12 days, and all attempts of rescue and salvage exhausted, she sank on the 2nd of March.

The ship was carrying 3.965 cars from the Volkswagen Group, most of them luxury brands, such as Audi, Bentley, Lamborghini, and Porsche. In a press release, the British risk analysis firm Russell Group said that the total value of the cargo on board the vessel is estimated in 438 million dollars, 400 million in cars and 38 million in other goods.

Volkswagen did communicate that the company holds a policy for this kind of casualty, but they did not detail the type of Insurance. For events such as the Felicity Ace, three different Insurance policies would apply: hull Insurance for the machinery, equipment, and the ship; the P&I Insurance that covers the charterer’s liabilities to third parties and the cargo Insurance for vehicles and goods on board.

As for the cargoes, most of them cars, and regarding the ownership in the moment of the accident, the International Commercial Terms – Incoterms – will be applicable. Depending on the negotiated Incoterms the exact point of risk transfer from the seller to the buyer will be defined and who will be liable for getting the insurance, either Volkswagen or the importers.

The sank vehicles will be covered by the Volkswagen exports insurance just in case the selling is made under CIF and CIP terms, or eventually under DAP, DPU and DDP, in which the seller is responsible of delivering the goods to the buyer in the country of destination. For the other terms (EXW, FOB, CFR, CPT, FCA, FAS) contracting the insurance is an option for the buyer, which might also be Volkswagen itself in case of a inter-company operation, but having in mind thar the import insurance is not mandatory in USA.

Every interest on a maritime adventure should never embark without insurance. Natural catastrophes, accidents, general average, loss, theft, fire and explosion, etc. The risks are numerous and may provoke big and serious issues to the different interests.