They all agreed to make a very similar diagnosis for each of their countries that, although having their own particularities, have faced the pandemic without it influencing the industry in terms of performance and productivity.

Across the board, the insurance industry has responded quickly and effectively to the virus. Jorge Claude highlighted the fact that the pandemic clause was included in the policies and that in countries such as Chile and Mexico insurers offered life insurance to health personnel working with COVID patients.

The branches that have been most affected and in which all the participants also coincided were cars, with drastic reductions in travel and the purchase of vehicles; credit insurance between companies, especially those in the tourism sector; business interruption due to the pandemic, which was excluded in premiums; and life insurance (in both Chile and Mexico there has been a delay in the payment of life annuities).

As Luis Enrique Bandera added, the after effect has been to ‘accelerate the digital conversion’ due to the transformation of work and consumption habits, not to mention ‘the economic crisis with unforeseeable consequences’ and whose ‘impact is still unknown at the level of unemployment, education and work’.

The Covid has also brought a break in paradigms such as, for example, that it is no longer necessary to live near where one works. The industry has risen to the challenge by teleworking 90% of most of its workforce without affecting quality and customer service. However, the rise of digitalization and remote work have brought an increase in electronic fraud and cyber risk, very much to be considered by insurers, who will have to offer products adapted and limited to this type of risk. 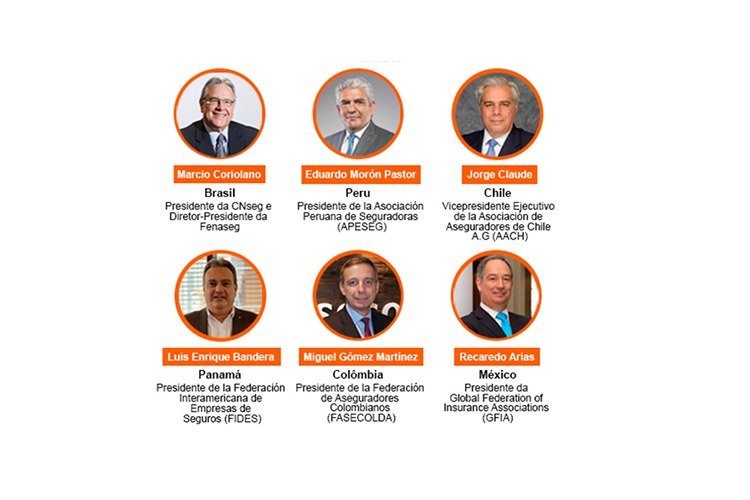 Eduardo Morón put on the table the sale of policies in a nonface. In Peru ‘we are discussing with the regulator the facilitation of online sales’, a step that has already been taken by Chile with the verification of identification of people through different applications, ‘thanks to the fact that the Administration opened to it,’ said Jorge Claude.

As for regulators, Luis Enrique Banderas acknowledged that ‘they have tried to be empathetic with the industry although reality has surpassed them’. In his view, ‘they should comply with their countries rather than international agencies’.

For its part, Recaredo Arias indicated what is really its role: to guarantee the activity of the insurance business, manage solvency and liquidity risks, support the insurance companies by adapting the terms and payment of policies and ensure the reputation of the sector. From GFIA ‘we have asked for regulatory flexibility that allows us to give an efficient attention to the insured’.

However, Miguel Gómez Martínez spoke about the case of Colombia, where there is ‘very strict supervision of insurance companies’ by the regulatory body. ‘Having to report a lot of information has generated a lot of administrative pressure’. According to the president of FASECOLDA, in his country he has gone further by requiring all companies to review a lower risk in all branches. If this is the case, ‘insurers must refund premiums or give special conditions at the time of renewal’. The branches most affected in this respect have been cars and compulsory mobility insurance. Gómez Martínez expressed concern that ‘this situation that has been caused by the pandemic is spreading indefinitely.

The participants in the webinar expressed their concern about ‘the populism that exists in the environment’ and the ‘legislative tsunami’ that the sector is facing in many of these countries. Today in Colombia there are more than 600 decrees in operation, of which about a hundred affect insurance, when the average was 250 in a whole legislature. ‘Many of them are poorly thought out and without technical support,’ said Miguel Gómez Martínez.

Luis Felipe Bandera commented that in Panama the work of the government has affected the situation in a negative way showing ‘great weaknesses’ and gathering a populism ‘that seeks short-term political benefits but not real solutions.

The solutions are being offered by the industry itself. AIFM has made several recommendations to ensure the financial stability of the insurance industry. Some of them are that insurance should remain a global objective, that it should be established as an essential activity and that insurance care should be maintained during the crisis.

For the original article see: https://futurelatam.inese.es/

Insurance penetration grew to 2.4% of GDP, but the country is well below the 8% recorded by the OECD, said the finance secretary [...]

The institution highlights the new technologies and infrastructure to handle cargo [...]

Swiss Re has stayed at the top of the Top 50 Global Reinsurance Groups leaderboard, as significant growth in large non-life transactions helped the company increase its gross premiums written by 16% in 2019. [...]

Colfecar projects that transporters will again mobilize up to 9.9 million tons at the end of the year. The association asks to suspend toll payments. [...]