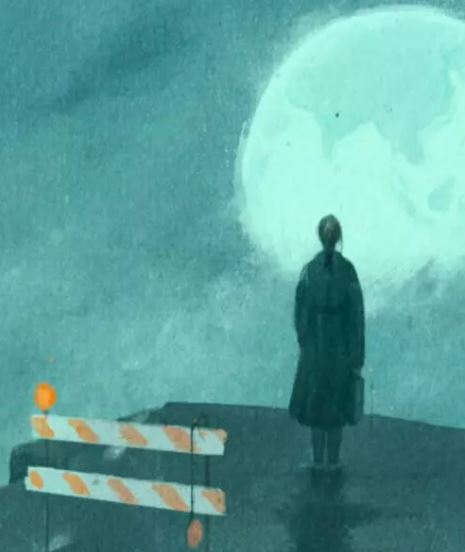 At ALSUM we review in Spanish the Global Risk Report, a report of the World Economic Forum. The original document is available at: https://weforum.org/reports/the-global-risks-report-2021

The sixteenth edition of the Global Risk Report of the World Economic Forum analyses the risks of social fractures, which manifest themselves through persistent and emerging risks to human health, rising unemployment, widening digital divides, the disillusionment of young people and geopolitical fragmentation.

Companies run the risk of a disorderly reorganization that may exclude large groups of workers and companies from the markets of the future. Environmental degradation, which remains an existential threat to humanity, runs the risk of intersecting with social fractures and bringing serious consequences. However, as the world is more attuned to risks, lessons can be drawn to strengthen response and resilience. In 2020, the risk of a pandemic became a reality. As governments, businesses and societies grapple with COVID-19, social cohesion is more important than ever.

The immediate human and economic cost of COVID-19 is severe. It threatens to delay years of progress in reducing poverty and inequality and to further weaken social cohesion and global cooperation. Job losses, a widening digital divide, disrupted social interactions and abrupt changes in markets could have dire consequences and lost opportunities for much of the world’s population. The ramifications, in the form of social unrest, political fragmentation and geopolitical tensions, will shape the effectiveness of our responses to the other key threats of the next decade: cyberattacks, weapons of mass destruction and, most notably, climate change. 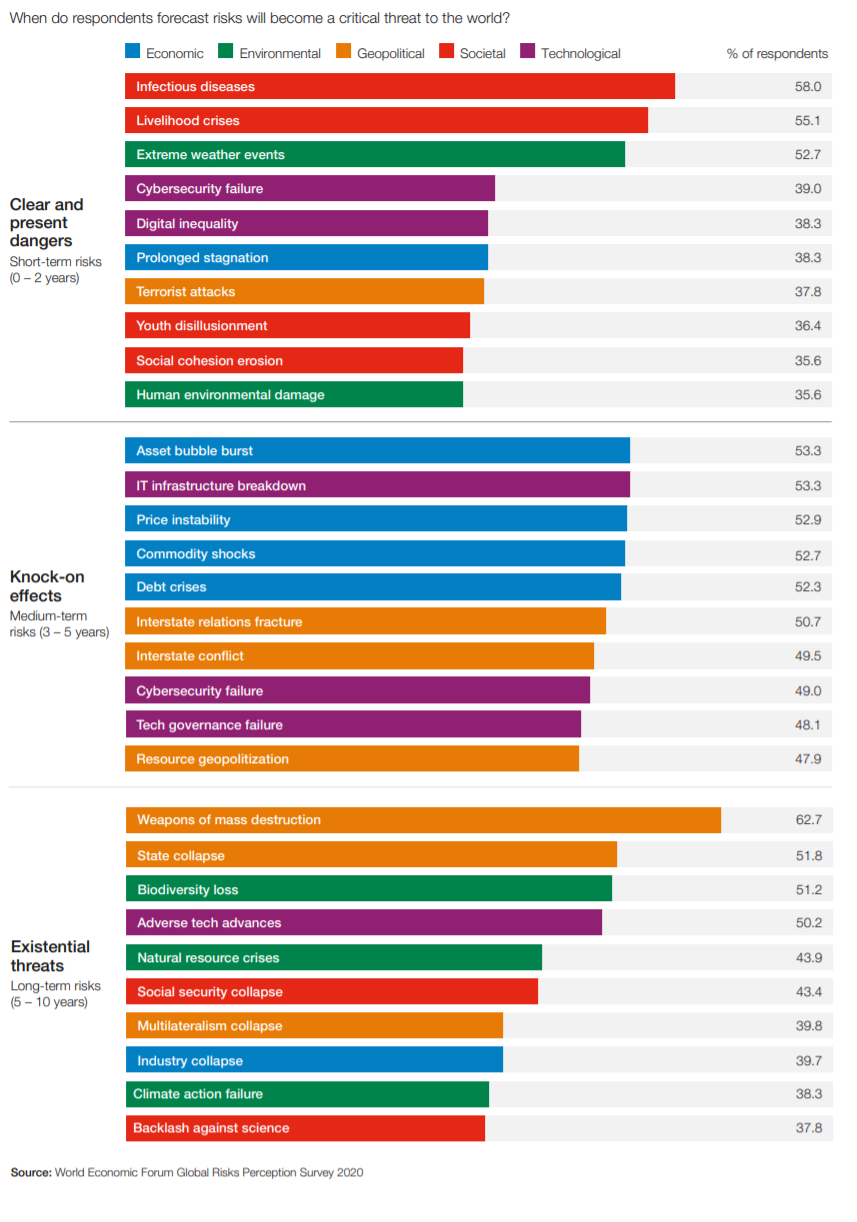 When it comes to the time horizon within which these risks will become a critical threat to the world, the most imminent threats, which are likely to occur in the next two years, include employment and livelihood crises, widespread disillusionment of young people, digital inequality, etc. economic stagnation, man-made environmental damage, erosion of social cohesion and terrorist attacks.

Economic risks feature prominently over the 3-5-year period, including asset bubbles, price volatility, commodity crises and debt crises, followed by geopolitical risks, including conflicts and inter-State relations, and the geo-politization of resources. Over the next 5 to 10 years, environmental risks such as biodiversity loss, natural resource crises and the failure of climate action dominate; along with weapons of mass destruction, adverse effects of technology and collapse of states or multilateral institutions.

Economic fragility and social divisions are expected to increase

Underlying disparities in health care, education, financial stability and technology have led to a disproportionate impact of the crisis on certain groups and countries. COVID-19 has not only caused more than two million deaths at the time of the report, but the long-term economic and health impacts will continue to have devastating consequences. The economic shock wave of the pandemic (495 million jobs were lost in the second quarter of 2020 alone) will immediately increase inequality, but an uneven recovery can also do so. Only 28 economies are expected to grow by 2020.

A widening digital divide can worsen social fractures and undermine the prospects for an inclusive recovery. Progress towards digital inclusion is threatened by growing digital dependency, accelerated automation, information suppression and manipulation, gaps in technology regulation and gaps in technological skills and capabilities.

While the digital leap opened opportunities for some young people, many are now entering the workforce in an employment ice age. Young adults around the world are experiencing their second major global crisis in a decade. Already exposed to environmental degradation, the consequences of the financial crisis, rising inequality and the disruption of industrial transformation, this generation faces serious challenges to its education, economic prospects and mental health.

According to the survey, the risk of ‘youth disillusionment’ is largely ignored by the global community but will become a critical threat to the world in the short term. The triumphs of society that have been hard fought for could disappear if the present generation lacks adequate paths to future opportunities and loses faith in today’s economic and political institutions.

Climate change, to which no one is immune, remains a catastrophic risk. Although worldwide blockades caused global emissions to fall in the first half of 2020, evidence from the 2008-2009 financial crisis warns that emissions could recover. A shift towards greener economies cannot be delayed until the impacts of the pandemic are eliminated. The ‘failure of climate action’ is the most impactful long-term risk and the second most likely identified in the survey.

Responses to the pandemic have led to new internal and geopolitical tensions that threaten stability. The digital divide and a future ‘lost generation’ are likely to test social cohesion from within borders, exacerbating geopolitical fragmentation and global economic fragility. With stagnations and hotspots increasing in frequency, respondents rated the ‘collapse of the state’ and the ‘collapse of multilateralism’ as long-term critical threats.

The intermediate powers, influential states that together represent a greater share of the global economy than the United States and China combined, often advocate multilateral cooperation in trade, diplomacy, climate, security and, more recently, global health. However, if geopolitical tensions persist, the intermediate powers will struggle to facilitate a global recovery, at a time when international coordination is essential, and to strengthen resilience in the face of future crises. The poll points to a challenging geopolitical perspective marked by ‘fracture of inter-state relations,’ ‘inter-state conflict,’ and ‘geo-politization of resources,’ all predicted as critical threats to the world in three to five years.

A polarized industrial landscape may emerge in the post-pandemic economy

As economies emerge from the impact and stimulus of COVID-19, firms face restructuring. The crisis has given new impetus to existing trends: nationally focused agendas to halt economic losses, technological transformation and changes in the social structure, including consumer behavior, the nature of work and the role of technology in both work and home. The trade risks emanating from these trends have been amplified by the crisis and include stagnation in advanced economies and loss of potential in emerging and developing markets, the collapse of small enterprises, which widens the gaps between large and small enterprises, reduces market dynamism and exacerbates inequality; hindering the achievement of long-term sustainable development.

With governments still deliberating on how to move from emergency to recovery, and with companies anticipating a changed business landscape, there are opportunities to invest in smart growth, clean and inclusive that will improve productivity and deliver sustainable agendas.

Better ways to manage risks and improve resilience are available

Despite some notable examples of determination, cooperation and innovation, most countries have struggled with aspects of crisis management during the global pandemic. While it is early to draw definitive lessons, this edition of the Global Risk Report reflects on global preparedness by analyzing four key areas of the response to COVID-19: institutional authority, risk finance, collection and exchange of information, equipment and vaccines. It then analyses responses at the national level, recognizing the varied starting points for individual countries, and draws lessons from five domains: government decision-making, public communication, capacities, health system capacities, blockage management and financial assistance to the vulnerable.

However, if the lessons of this crisis only inform decision makers how to better prepare for the next pandemic, instead of improving risk processes, capacities and culture, the world will plan again for the last crisis instead of anticipating the next. The response to COVID-19 offers four governance opportunities to strengthen the overall resilience of countries, businesses and the international community: (1) develop analytical frameworks that adopt a holistic, systems-based view of risk impacts; (2) invest in high-profile ‘risk champions’ to foster national leadership and international cooperation; (3) improve risk communication and combat disinformation; and (4) explore new forms of partnerships on risk preparedness.